Back to Top
Return to Portfolio

According to Porsche and Boeing, commercial passenger drones will enter the market around 2025.1 Eccentric millionaires may be able to purchase these vehicles for private use, but how will the general public gain access? Will there be sufficient interest to support incorporating these vehicles into existing public transit systems? Are people willing to shell out to have a vehicle pick them up at their door and take them to their destination on demand? I needed to explore different value propositions and business models to find a way these vehicles could be made accessible to the general public, namely those working or living in the city of Los Angeles.

This project needed to be completed within one semester (i.e. 5 months) and within a budget of $125 (which was to be used for user research and advertising campaigns).

Get to Know the Customers

There is only so much you can learn about customers’ needs and goals by reading about LA transportation online. I developed a provisional persona based on my online research, but I needed to know more about what everyday people expected from these futuristic modes of transportation. Would they anticipate them working like modern public transit, coming and going from common stops, or would they expect them to be more like Uber, calling up a vehicle on demand? To answer this question, I hit the streets of downtown Los Angeles to catch my would-be customers and ask them some questions to learn more about their current transportation experience and their expectations for the future of LA transit. My customer discovery process included 10 individuals.

Based on the insights I gathered during the interviews, I defined my value proposition as “Uber for autonomous flying vehicles” and fine-tuned my persona to ensure I accurately captured real user needs and behaviors. Meet the efficient millennials. They worry about the safety of autonomous flying vehicles but also know that they’re not very far off in the future. They like to relax or work while in transit and need quick and affordable ways to get around, even if it means carpooling occasionally.

Though talking to more people would have helped confirm my findings, to keep within the time constraints, I had to get started shaping a solution that I could get in front of more people. To make sure I wouldn’t waste any time building a solution that was already out there, I took a look at the current marketplace.

Armed with an understanding of the problems faced by my persona and their interest in my value proposition, I moved on to conducting a competitive analysis. Though the technology is still a ways off, there was a surprisingly large existing market for autonomous flying vehicles (both the manufacturing and design of the vehicles themselves as well as solutions for bringing the technology to the public). I evaluated 3 direct competitors and 5 indirect competitors, comparing their funding, revenue streams, number of prototypes, competitive advantages, customer reviews (where appropriate), and more. Unsurprisingly, with a value proposition of Uber for autonomous flying vehicles, the biggest competitor was Uber itself. With $24.7 billion in funding and an enormous existing customer base, Uber Air (also called Uber Elevate) was a formidable competitor.

However, they were planning to charge customers $5 per mile to fly, which would be inaccessible for many of Los Angeles commuters. Rather than contend with Uber by trying to make my own Uber for flying autonomous vehicles, I decided to pivot to an app for booking autonomous flying shuttles with lower flat rates and discount passes. This way I could differentiate by focusing on the needs of more budget-conscious customers.

This change in value proposition was inspired by an insight from my customer discovery: people were interested in seeing these vehicles used like modern public transportation. Satisfied that the new value proposition was sufficiently unique in the marketplace, I began creating a high-fidelity prototype to get in front of potential customers.

Using Adobe XD, I crafted a high-fidelity prototype that would walk a customer through the experience of taking a flight as part of a multi-modal route. I looked at relevant UX influencers, such as Uber, Lyft, and CityMapper because I wanted to include familiar features to make using this new technology feel as familiar as hopping on a bus. This process led me to include a detailed route overview as well as easy payment options and clear boarding directions.

Needing to test the pricing model, I provided options for paying for a single ride as well as buying week and month passes. To test the app with potential customers, I also needed to give it a name and logo. I chose “Volamos” since it is Spanish for “we fly” and there is a large Spanish-speaking population in Los Angeles. And I selected a paper airplane as the logo to convey these ease and excitement with which someone could ride in an autonomous flying vehicle.

With a working prototype in hand, it was time to evaluate whether or not this solution was something real people would want or need. But the prototype was completed in March 2020, just as the COVID-19 pandemic struck in Los Angeles. This meant that for the first time, I would have to conduct my user research entirely online.

You can see what the prototype looked like after user research here.

I turned to Facebook groups of people living in Los Angeles to recruit participants. I used a Qualtrics survey with timed screener questions to find people who fit my persona and scheduled 5 participants for individual 30-minute interviews over Zoom.

My hypotheses were that participants would need or want the solution, that they would prefer the subscription-based pricing model over other options, and that they would find the listed prices agreeable. I set my success criteria at 80%, meaning 4 out of 5 participants would need to confirm each hypothesis for me to move forward with this value proposition and business model. 80% of participants confirmed that they needed or wanted this solution and that they liked the subscription-based pricing model, but 0% agreed with the listed prices, so I swapped expensive unlimited ride passes for cheaper membership options.

Also, participants were confused by the app’s name and logo. They felt that the futuristic transportation option needed stronger branding that inspired more confidence with a logo that looked more like those of other transportation apps.

I updated the prototype to include the new membership option (inspired by the perks of Lyft’s membership program), redesigned the logo and shortened the name to “Vola,” and provided some clearer in-app guidance where participants had stumbled. 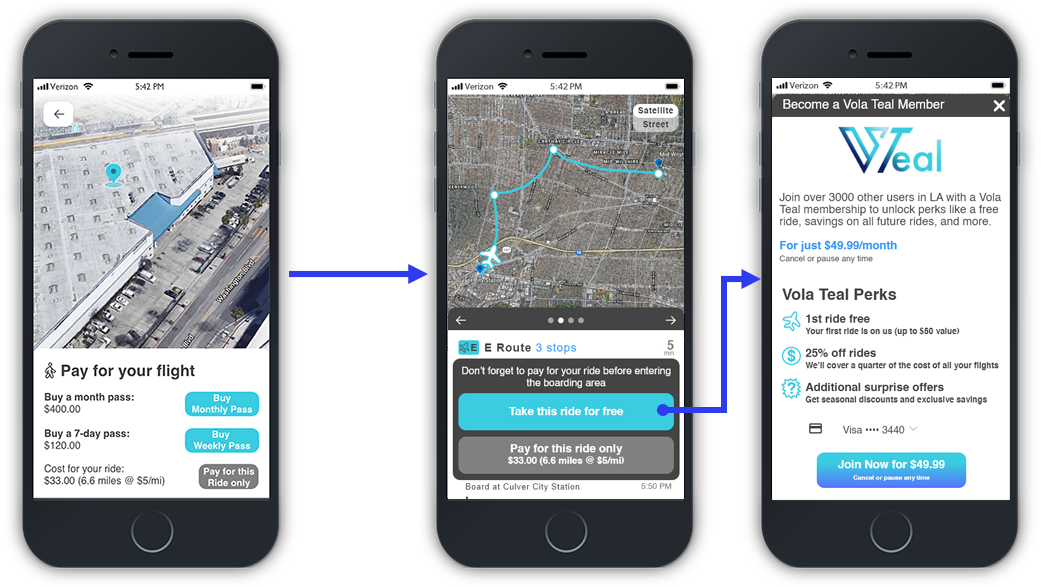 To further evaluate the value proposition, I needed to get the app in front of more than just 5 people, so I decided to run an experiment with a much larger sample size. About 500 times larger.

I ran two advertising campaigns on Facebook narrowing in even further on who my potential customers were before I realized that what I really needed to know was why my potential customers would want to use this app. Was it really for commuting as I had imagined? Or would it be for the experience of flying? Understanding this driving force for customers would help me curate the user experience appropriately and influence future marketing decisions: what route information would be conveyed, how the app could be advertised after development, etc. To this end, I created two different advertisements linked to identical Unbounce landing pages with app download buttons. 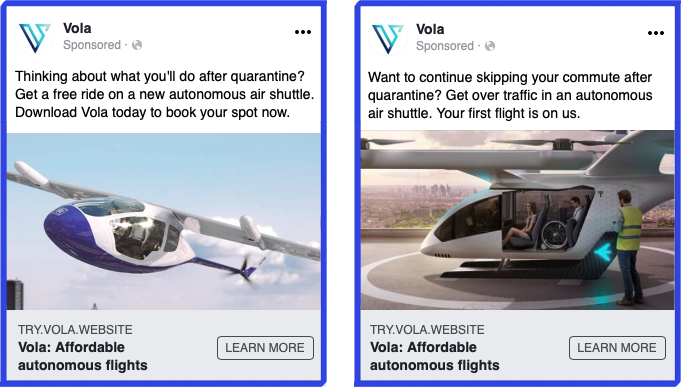 One ad referred to the app as a chance to book a one-off experience while the other referred to using it as part of a regular commute. As a control, I targeted the exact same audience with each ad and ran them with the same budget for the same period of time. I also showed those who clicked on either ad the exact same landing page. This was so I could evaluate the most important variable: the ad. Because I was interested in people who would want to download and use the app, I looked at not only how many people clicked on the ad and the cost per click but also the conversion rate (the number of people who tried to download the app out of the total number of people who clicked on the ad). 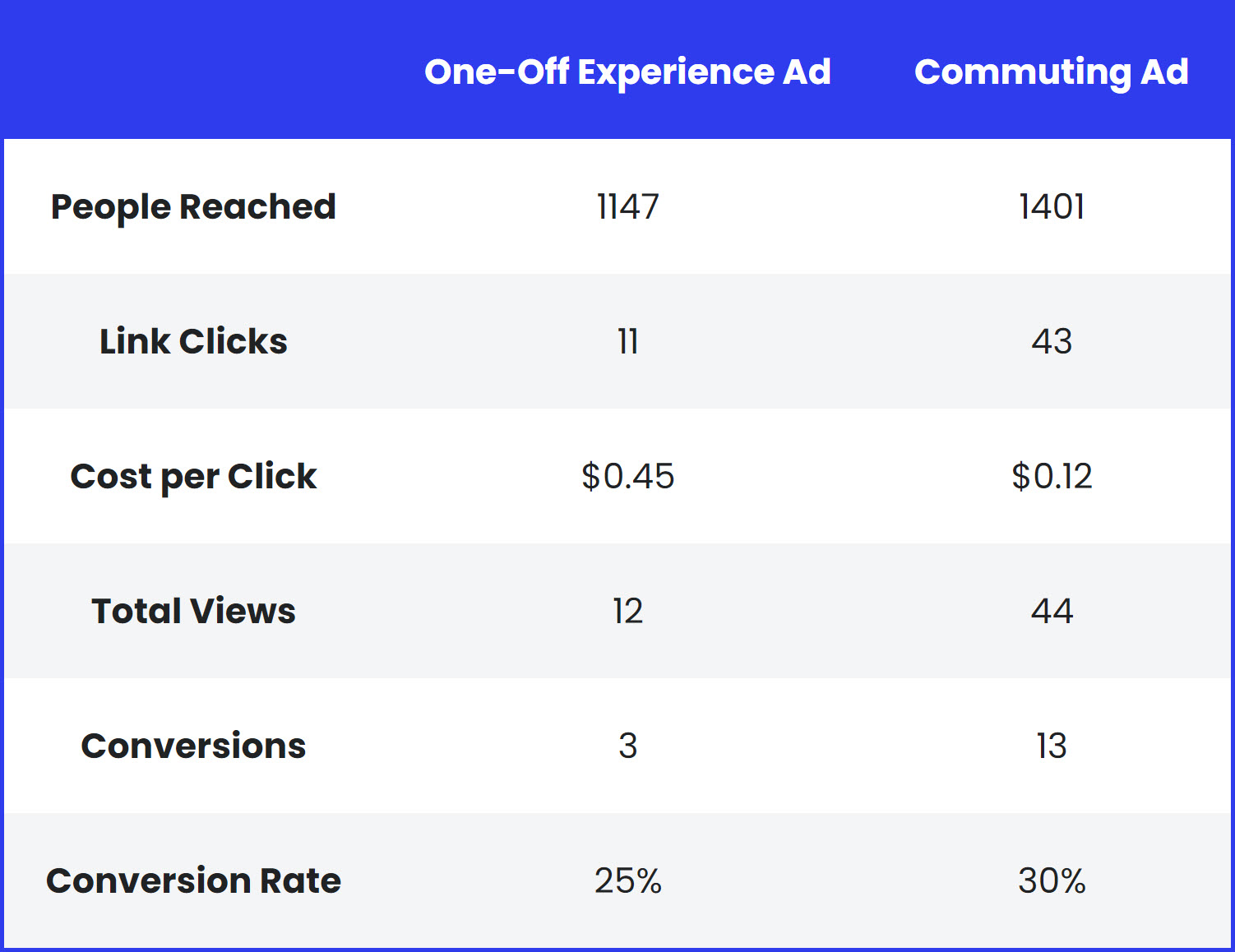 By the end of this project, I was able to validate the value proposition of an app for booking an autonomous flying shuttle for commuting purposes and uncover customer interest in a subscription-based pricing model.

Because this was a university project, this app was not developed (but you can check out the final prototype here). If I were to continue working on this project, I would conduct more thorough user interviews with a larger sample size to validate that the changes I made after the first round of interviews addressed real customer needs and to uncover additional areas for improvement. If the app was developed, I would use customer reviews and complaints in addition to usability testing to assess the impact of the design on business objectives.

Flying autonomous vehicles will be here before we know it, and I greatly enjoyed the opportunity to explore how we might make this technology more accessible and affordable for the general public in Los Angeles.

Thank you for reading. If you are interested in my work, reach out. I’d love to learn about your project and see how I can help!